In October of 1922 a schachkongress was held at the resort spa of Teplitz-Schönau, Czechoslovakia. Fourteen   European chess masters were invited to participate in the round robin event. Despite the absence of strong players such as world champion Jose Capablanca, former champ Emanuel Lasker, and Alexander Alekhine, twelve of the fourteen participants were later estimated to be in the top twenty- five of the world at that time. Among those in attendance were the great masters Akiba Rubinstein, Siegbert Tarrasch, Rudolph Spielmann, and Savielly Tartakower. Representing Czechoslovakia were Richard Réti and Karel Treybal. Reti, the hypermodernist, and Spielmann, the romanticist, tied for first place, each with 9 points out of 13 rounds. For Réti it was an impressive follow up to his clear first at Goteborg in 1920, especially because he won in spite of three losses. He scored nine points by earning 8 points in wins against over half the field, including top finishers Spielmann, Tartakower, and Rubinstein. For Spielmann the shared first was a significant achievement as he had been a familiar competitor at international events whose passionate play and opening choices had been more admirable than successful until now. Despite the absence of top players, the tournament achieved attention through its seven brilliancy prize games of amazing artistical and techinical skill. Heinrich Wolf won the grand brilliancy prize for his win over tournament co-winner Réti in the sixth round. The third brilliancy prize went to Tartakower for his astounding sacrificical combination against Geza Maróczy in their fourth round Dutch game. The remaining five brilliancy prizes were all won by Rubinstein for the five of six games he won in the tournament! Partie here. 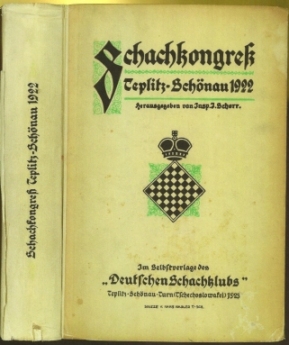